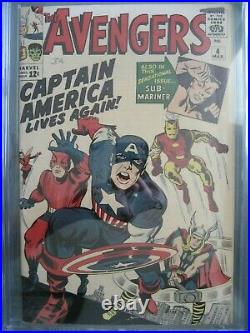 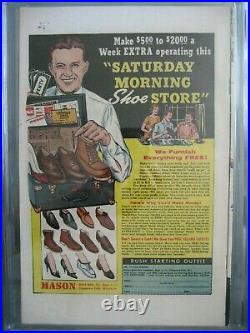 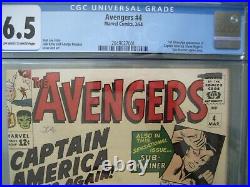 1st Silver Age Captain America (Steve Rogers). Stan Lee (Story) Jack Kirby & George Roussos (Art & Cover). After escaping his battle with the Avengers, Namor angrily continues his search for his missing people. He eventually finds his way to the North Sea, where he discovers a tribe of Eskimo people worshipping a dead man frozen in a block of ice. Still angry at humanity Namor approaches the Eskimos, causing them to flee as he throws the ice block into the water. It drifts away, slowly beginning to thaw. By chance, the Avengers are in the area in their undersea craft. They spot the figure in the water and Giant-Man pulls him onboard. Upon inspection they notice that he wears the clothing of long-lost World War II hero Captain America. Suddenly, he awakens and, in a fit of panic and confusion, charges at the Avengers before realizing his surroundings and calming down. Iron Man asks the mystery man who he is and the Avengers are skeptical when he tells them he is indeed Captain America. After a brief demonstration of his ability they quickly change their minds. Captain America explains his last memories: He speeds towards an experimental plane on a motorcycle with his sidekick Bucky. Unknown to the duo, the plane had been sabotaged by Nazi agent Baron Zemo. Bucky manages to get on board while Captain America slips and falls from the plane. The last thing he remembers is the plane exploding with Bucky on it as he falls through the sky into the frozen waters off Newfoundland. Back in the present day, the Avengers have docked in New York City and are greeted by a crowd of journalists looking for interviews about the battle with Sub-Mariner and the Hulk. Suddenly, a camera flashes and turns the team into stone.

The journalists think it is a publicity stunt and leave. Aboard the sea craft Captain America awakens and exits onto the dock.

He also spots the statues but dismisses them as statues made to honor the heroes. Cap finds the modern world very unusual and alien but finds his way to a hotel. Later, Cap is awoken by a vision of Bucky, but it is revealed to be Rick Jones. He has been following Cap's trail across town, looking for clues to the Avengers' whereabouts. They team up to solve the mystery and examine photos taken at the dock. Cap discovers one of the photographers carrying what looks more like a weapon than a camera, and Rick sends his Teen Brigade to search around the city to find the mystery man. Eventually Captain America finds the man in question and approaches him. His gang overhears his entrance and a fight breaks out. Cap easily defeats them despite being heavily outnumbered, and exposes the leader as an alien. The alien, a member of the race called the D'bari, explains that his spaceship crashed into the ocean and the Sub-Mariner promised to help him return to his planet if he turned the Avengers to stone. Captain America offers to help the D'bari if they reverse the stone effect on the Avengers and he complies, freeing the Avengers once again. In his castle, the Sub-Mariner angrily observes the scene and plans another tactic to defeat the Avengers. As if by luck, a troop of his Atlantean Elite Guard pass nearby and Namor rallies them to his side. On the surface, Giant-Man and Captain America are suddenly attacked by Namor and his elite guard, sending them into the water. Namor duels with Iron Man, slowly gaining the upper hand.

The Wasp flies in to distract Namor, giving Iron Man essential recovery time. Namor's elite guard plead for aid against the mighty Thor, who is making short work of them. Thor deflects the Atlanteans' weapons back at themselves, scattering the troops. Namor now battles one-on-one against Thor.

Meanwhile, under the water, Giant-Man is ensnared by a massive net. However, he escapes by taking a shrinking capsule before he suffocates. He emerges near Iron Man, and they take care of the remaining Atlantean elite guard. Namor again attempts to take Thor's hammer from him, to no avail, and soon has to deal with Giant-Man and Iron Man as well. Captain America watches, trying to get a feel of what sort of team the Avengers are.

The fight is brought to a standstill when some of the Atlanteans reveal a hostage - Rick Jones! With his uncanny reflexes, Cap leaps in and frees Rick and the fight begins anew. Suddenly an earthquake strikes the island and the Sub-Mariner leaves, believing the Avengers to be consumed by it.

Little does he know, the tremors were actually caused by the launching of the D'bari spacecraft. The Avengers watch the D'bari leave and then officially offer Captain America a place on the team, which he readily accepts. Nearby, Rick looks out on the ocean deep in thought, torn between his loyalty to the Avengers, and to his old friend the Hulk. I cannot bear physical contact with primitive beings! The item "Avengers #4 CGC 6.5 1965 1st app Silver Age Captain America (Steve Rogers)" is in sale since Thursday, March 26, 2020.

This item is in the category "Collectibles\Comics\Silver Age (1956-69)\Superhero\Avengers". The seller is "madeofmiracles925" and is located in Dublin, California.