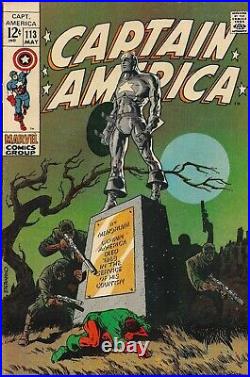 Captain America #113 F+ 6.5. "The Strange Death of Captain America, " script by Jim Steranko (plot) and Stan Lee (dialogue), pencils by Jim Steranko, inks by Tom Palmer and Jim Steranko; The news reports Cap's death and explains that "Steve Rogers" was a fake identity while Madame Hydra has Cap's HYDRA file burned; A flashback reveals how she replaced Baron Strucker as head of the organization; The Avengers, Nick Fury, Sharon Carter and several SHIELD agents hold a wake but are suddenly gassed by HYDRA; Rick follows to the cemetery and is almost caught, but Cap unexpectedly appears on a motorcycle, very much alive! A battle follows, ending when a set of missiles miss their target and kill Madame Hydra; Cap reveals he faked his death in order to retain his secret identity.

An above average copy that shows minor wear, but is still relatively flat and clean with no significant creasing or other serious defects. Eye appeal is slightly reduced because of light surface wear and the accumulation of small defects, especially on the spine and edges. A FINE+ comic book appears to have been read a few times and has been handled with moderate care. Should you have any concerns once you receive the item please contact me and give me the opportunity to address these.

Please note that orders paid by echeck or personal cheque will be subject to delay until the funds clear your bank. I bag and board all items. The item "Captain America #113 F+ 6.5" is in sale since Sunday, February 28, 2021.

This item is in the category "Books, Comics & Magazines\Comic Books & Memorabilia\Comics\Comics & Graphic Novels". The seller is "dncomics" and is located in Berkeley.