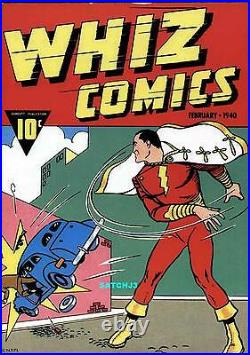 And check out OUR NEWLY LISTED ITEMS. This is the extremely hard to find Whiz Comics #2 cover plaque, produced in 1974 by Studio One as part of the Classic American Covers series. It is a beautiful piece, featuring one of the most classic Golden Age covers. The plaque measures approximately 10" by 14", and is also about 1/4 deep.

There is a small metal hook piece at the middle top of the back, so the piece is all ready to be hung up and displayed. The piece has some minor wear, but overall is in very good condition, particularly given its age and scarcity. The cover image has a smooth and shiny appearance, and seems like it is laminated. The cover to Whiz #2 is likely one of the most important and most recognized covers to ever grace a comic book. It is also one of the most distinctive covers ever done, since Cap.

Marvel is of course regarded as a hero, and would not normally throw cars into brick walls! Whiz Comics #2 is the all-time classic comic issue which featured the first appearance and origin of Billy Batson/Capt.

Originally published in February of 1940 by Fawcett Comics, this is one of the single most valuable comics ever published, with values established well into the tens of thousands of dollars. It included story and art by legendary creators Bill Parker and C. Beck, who launched their famous creation in this issue.

The cover features no text at all, and simply features an incredible action image of The World's Mightiest Mortal. This issue was one of the landmarks of the comic book explosion and Golden Age, so it is hard to think of a comic cover that a collector could more proudly display. These plaques are incredibly difficult to find, and very rarely surface for sale.

Don't miss a rare opportunity to add this fantastic piece to your collection. Check out our other auctions for more great items.

The seller is "satchj3" and is located in Brooklyn, New York. This item can be shipped worldwide.